The year was 1962 when Karl Buettner and Burt Chickering opened a men’s haberdashery at 326 East Mitchell Street in Downtown Petoskey. They called it “The Clothes Post.”

A block over next to the Hollywood Theater at “Renick’s Gifts,” a young man began a retail career as a stocker in 1967. He had visions of working in a menswear store, but at thirteen-years-old, he was slated as too young; however, two years later and now the ripe age of fifteen, young Jeff Pagel took a job as salesperson at “David’s” across from The Clothes Post.

“I remember the first suit I sold. You know that was pretty scary. These two ladies walk in, and I said, ‘Good morning, ladies, I’m here to help you.’ They said they were looking for suits. I asked, ‘What size are you looking for?’ It doesn’t matter they said. Well, that wasn’t sales language I was familiar with. Turns out the suit was for a funeral,” Jeff laughed. “I looked at David and said, ‘Well, that was easy’ and that was the first suit.”

David passed away young, and Jeff found himself in the tutelage of Willie Shomin.

“I worked for Willie until after high school then I moved to Florida,” Jeff recalled. “Came back to work with Willie, thinkin’ I’d get back to Florida.”

Wandering around the store, I notice the antique furniture placed strategically for displaying shirts, sweaters, ties, and other accoutrements. These woven environs allow for easy choices when accessorizing.

“A lot of these pieces were John’s. He let me use them and eventually I purchased the lot of them,” says Jeff.

A customer enters during our discussion, and Jeff does what he does best: customer service. The entire business model of The Clothes Post was built upon, and remains, a personal approach to each and every customer. Jeff assists with a suit fitting while I gaze outside at the falling snow and wonder: over the last 60 years how many people have sat at this very table picking out gifts for the Holiday Season?

Jeff sews up his time with his current favorite customer and in walks a character seen here many a time, Dr. Bill Millar. Jeff saunters over to the table, and the banter ensues. Besides Dr. Millar’s wish to have his grandson in for a wardrobe change, the two share stories of “characters” from Petoskey’s past. I watch and listen as if in a tennis match. My hands can’t keep up with the notes I should be taking, so I rest and listen. I decide the hem has been basted.

Times are changing around us, and in Downtown Petoskey, we hold no stop sign or yield warning to change. People and businesses come and go. The Clothes Post is no different.

Looking out the window, Jeff sighs, “It’s been a great run. It really has. Who would have thought thirty-years-ago I’d be here?”

While not public with his plans, I can say we will miss the presence of Jeff and The Clothes Post amid our downtown arrays. The Holidays are upon us and 2022 will hopefully resonate a new hope of a post-COVID pandemic so Jeff may enjoy a retirement replete with splendor and enjoyment.

While threading a new path, Jeff, we thank you for the memories.

May 9, 2017  As you drive into Petoskey, feel comfortable. Among the downtown folk, young and old, alike, walk the town in a casual saunter in and out of shops, restaurants, museums, and galleries. There’s an absolute abandonment of formality, … A Casual Style Read More »

June 6, 2017 Downtown Petoskey hosted its annual Summer Open House this past weekend, and it was a joy to meet and talk with so many visitors from different locales around the country – and the world. Spending time drifting … Our Many Visitors Read More » 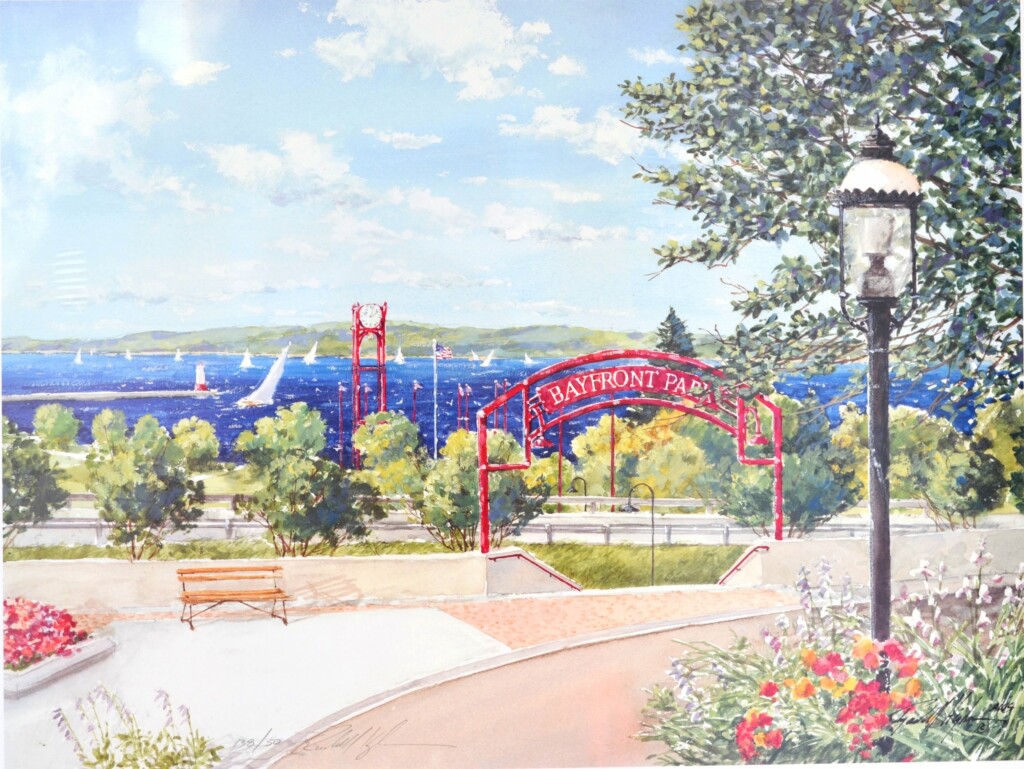 June 14, 2017 Two annual events happen this week in Downtown Petoskey: The Gallery Walk and the opening of the Farmer’s Market. In either case, color abounds as fresh food, paintings, sculptures and glassworks combine to usher in yet another … Art and Agriculture Read More »

1 thought on “The Clothes Post: The Spool Has Run Out”